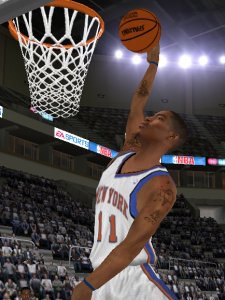 Jamal Crawford scored at will against his former team

Jamal Crawford showed no mercy against his former team, scoring 32 points for the Knicks in a 95-91 rout of the Bulls. Crawford scored 18 points in the first half as the Knicks jumped out to a quick lead and never looked back.

The Bulls managed to shoot just 42 percent from the free throw line, mostly due to Tyson Chandler's 0-for-8 performance. Chandler led the Bulls with 14 points, 15 rebounds and six assists while Eddy Curry spent early parts of the game on the bench. Curry finished with a season-low eight points in 21 minutes.

The Knicks led by as many as 23 points in the third quarter. The Bulls managed to outscore the Knicks 24-12 in the fourth, but by then the game was out of reach.

"I was really motivated to come out and get us a win," Crawford said. "The last game [against the Bulls] left a sour taste in my mouth."

Crawford was defending Ben Gordon in the two teams' last meeting in Madison Square Garden when Gordon drained a last second shot to give the Bulls a 90-89 win. Gordon had a better performance this time, but had no such chance for late heroics.

Stephon Marbury had 16 points for the Knicks and Malik Rose added 14 points and eight rebounds.

Luol Deng, Kirk Hinrich and Gordon each had 11 points for the Bulls. The Bulls shot 50% from the field, but managed just 1-of-11 from three-point range.