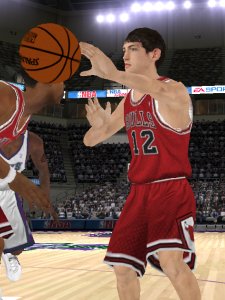 Hinrich dished out a season-high 13 assists

The Bucks had no answer for Eddy Curry, who had 28 points, 16 rebounds, five assists and three blocks, as the Bulls defeated the Bucks for the second time this week.

The Bulls opened the game with a 38-26 second quarter lead, but Milwaukee bounced back with a 11-0 run to cut the Bulls lead to one point. The Bucks tied the game at 42-42 to close the half.

The score was still tied going into the final quarter, but the Bulls opened up the game behind 14 points from Curry. Kirk Hinrich notched six assists in the quarter, most to Curry, and finished the game with a season-high 13 assists to go with 12 points.

Michael Redd led the Bucks with 21 points. Bonzi Wells came off the bench for 16.

For the Bulls, Luol Deng added 17 points and seven rebounds, and Antonio Davis had a double-double off the bench with 13 points and 10 rebounds.

The Bulls continue to hover around the .500 mark, having not won or lost consecutive games since back-to-back wins over the Knicks and Hornets two weeks ago.

"We have had trouble with our consistency this season," said coach Scott Skiles. "I'm starting to settle into a rotation and the guys are starting to respond. A.D. has been especially solid lately. If our backcourt can get it together, we'll be in good shape."

"Eddy has been fantastic this season. He has shown a lot more progress than I think anyone could have imagined. He's definitely having an All-Star year so far."